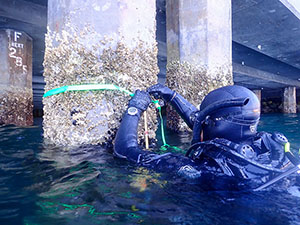 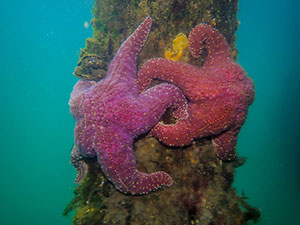 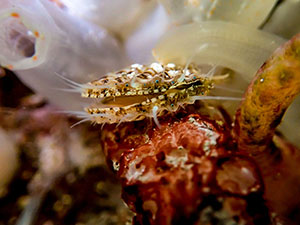 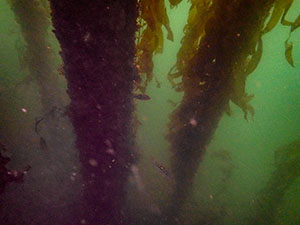 There are tens of thousands of concrete, wood, and steel pilings that support the wharfs and docks of the marine terminals, marinas, and other infrastructure. These structures provide a large amount of habitat for the types of plants and animals that live on hard surfaces, such as giant kelp, Sargassum, sea stars, mussels, oysters, and scallops, and they provide shelter and food to fishes such as bass and perch. Pilings generally have a high diversity of species as they extend from the seafloor all the way to the surface, with different types of animals adapted to living in different tidal zones. Pilings also create microhabitats similar to riprap such as exposed piling faces, ‘canopy’ at the edge of piers, and piling-to-sand transitions.

Animals in the upper intertidal zone such as barnacles that can often be seen from shore are well adapted to a wide range of light and temperature conditions because they are exposed to air and sunlight during low tides. The lower intertidal zone is exposed to air only during the lowest tides and is home to common and abundant animals such as mussels and oysters in addition to some hardy algae species. The subtidal zone is never exposed during low tide and extends to the seafloor. The subtidal is home to a wide range of algae such as giant kelp and Sargassum, hardy animals like scallops, and soft-bodied animals such as sea-squirts and anemones. Some animals such as sea stars, crabs, and lobsters can move between zones to hunt for food during favorable tides, when their prey is accessible.

Test your knowledge of intertidal animals by playing our game !

Scroll through the gallery below and click the thumbnails to view photos from the pilings habitat!